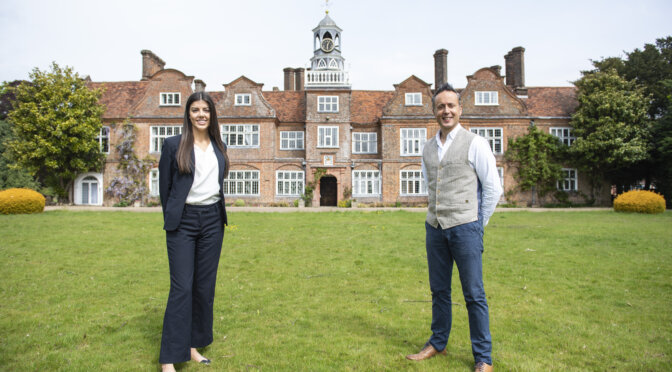 Over the summer of 2021, Rothamsted Manor, a Grade I listed Jacobean manor house, which is hidden away on the Rothamsted Estate in Harpenden will play host to a series of intimate concerts with stars performing popular hits from top West End Shows.

The impact of the Covid-19 pandemic has been devasting to musical theatre and the arts. Physical distancing requirements and the closure of venues has completely curtailed not only public performances but also rehearsals. Many West End shows have been unable to operate since March 2020. The Rothamsted ‘Musicals at the Manor’ summer series will provide the opportunity for West End stars to come together and perform in a very special and historic setting.

The collaboration came about when Steve, who is a Hertfordshire local, visited a Heritage Open Day at Rothamsted Manor last September with his family. He introduced himself to Abi Stanton who works at Rothamsted in the Events team. Steve suggested to Abi that they work in collaboration to make a series of intimate concerts happen, the result of which will be seen this Summer in what promises to be a series of entertaining, intimate and emotional concerts as the arts and events industries re-emerge from the ashes.

Steve Moss commented:
“It’s wonderful for me to be able to bring artists of this calibre to Rothamsted Manor. Musical theatre and the arts generally have suffered horribly throughout the pandemic. Artists who are at the top of their game have been unable to work and showcase their talents. Many of my friends and colleagues have been working in supermarkets, as delivery drivers, and in customer service roles to make ends meet. Its so wonderful to be able to collaborate with Rothamsted Manor and provide an opportunity for these incredible artists to showcase their talents again.”

Rothamsted’s Abi Stanton said:
“When I first met Steve and he told me of his ambitions to bring concerts to Rothamsted Manor, I really hoped that we could make it possible. The conferencing and events industry has suffered enormously during the pandemic: weddings have been postponed and business events have been moved online or cancelled entirely. For the concerts to be one of the first events that we can organise at the Manor as lockdown restrictions are lifted is so exciting. I’m proud I’ve been able to help make them happen with Steve.”

Nicole Sadd, CEO of Rothamsted Enterprises says:
“We are absolutely delighted to be able to hold events again. While the events industry has suffered tremendously during the pandemic, one of the silver-linings for Rothamsted has been that we have been able to engage with our local community more than ever before by running small, socially distanced events for the public when permitted. And what a series of events these are! We are very excited indeed to welcome these incredible artists to perform at the Manor. The building is so special and atmospheric and will be even more so when these singers perform. We simply cannot wait!”

Performance dates and artists are: