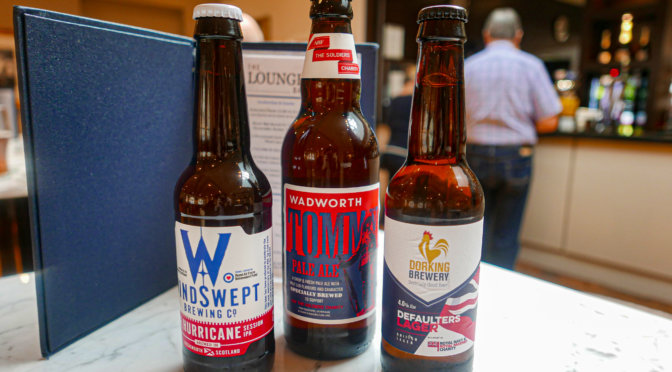 Victory Services Club is launching three specialist bottled beers to give event organisers the opportunity to support three charities when choosing beer for their events.

Mark Field, FIH, Operations Director, Victory Services Club said: “We have launched the beers to support three charities and to extend the selection of specialist beers available to our clients for drinks receptions and events. We have found that more and more companies have a CSR policy and are keen to support charities when choosing suppliers, venues and the food and beverage for their events.”

The three bottled beers are:

Tommy (3.6% abv) from the Wadworth Brewery; launched in association with ABF The Soldiers’ Charity to celebrate its 75th anniversary. For each bottle sold 5p will be donated towards the charity’s work supporting soldiers, veterans and their families in times of need.

Hurricane (4.5% abv) from the Windswept Brewing Company; produced to celebrate the 100 year anniversary of the Royal Air Force. With five pence from the sale of each bottle being donated to the RAF Benevolent Fund, the RAF’s leading welfare charity.

Defaulters Lager (4.0% abv) from the Dorking Brewery; produced in partnership with the Royal Navy and Royal Marines Charity. Five percent of the trade price is donated to support servicemen, women, and their families.

The beers will be sold individually in the Club’s event bars and available to clients for reception drinks.