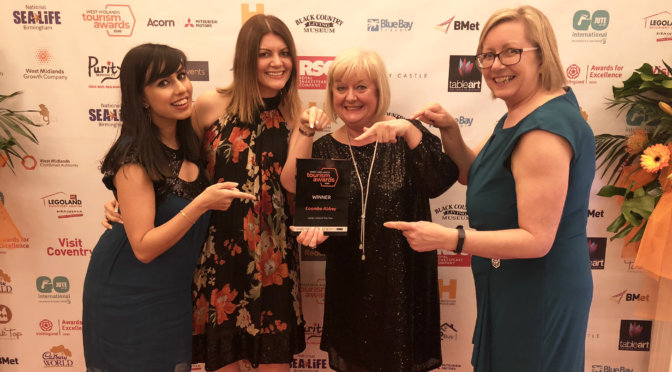 A historic Warwickshire hotel is celebrating after scooping a top prize in an inaugural industry awards ceremony.
Coombe Abbey Hotel has been named the Large Hotel of the Year at the West Midlands Tourism Awards.
Organised by West Midlands Growth Company and Reach with support from Visit England, West Midlands Combined Authority and Shakespeare’s England, this is the first year that the proceedings have gone ahead.

At a glittering ceremony hosted in the University of Birmingham’s Great Hall the hotel not only won gold in the Large Hotel of the Year category, but also scooped a bronze award in the Business Events Venue of the Year category.
Coombe Abbey had stiff competition for the Large Hotel of the Year trophy as they were up against big names such as the Malmaison Birmingham and Mallory Court Country House Hotel & Spa.
What makes the award win even sweeter is that is comes during a year of celebration as the venue is marking 25 years since it first opened its doors as a hotel.

There is also a chance for another award win for Coombe Abbey as West Midlands Tourism awards winners are automatically shortlisted for the VisitEngland Awards for Excellence 2020 to be in with a chance of being named a national winner.

Ron Terry, General Manager at Coombe Abbey Hotel, is thrilled with the win and thanked all staff for their hard work.
“We are extremely pleased and so honoured to have been named the Large Hotel of the Year,” said Ron.
“To have been up against some of the biggest names in the industry and come out with the gold is absolutely fantastic.
“Not only that, we are so proud to have won this award in its first year and to be recognised by our peers across the region.
“We could not do this without the dedication of every single member of staff who work tirelessly to uphold the standards and reputation of the hotel, so a huge thank you to the whole team as well.”