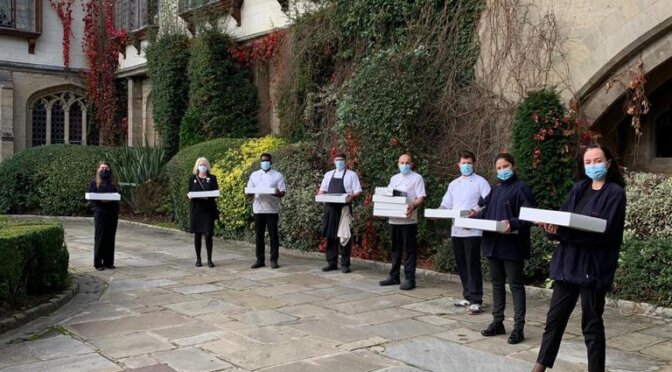 Kind-hearted staff from a historic hotel have made some special food deliveries to NHS workers and good causes as the country entered a second lockdown.

Coombe Abbey Hotel and its employees showed their caring side by sending surplus food to those who need it the most.

The venue has once again had to close its doors until December under the guidance from the Government, but the team did not want food to go to waste.

So, they decided to spring into action and hand it over to the Salvation Army, Cheylesmore Foodbank and University Hospital Coventry and Warwickshire.

This is not the first time that the hotel has done this, they sent food and toiletries to staff at University Hospital Coventry and Warwickshire during the first lockdown back in March.

That generous act saw the venue named a UK Business Hero by the British Chambers of Commerce after a nomination from the Coventry and Warwickshire Chamber of Commerce.

Ron Terry, General Manager of Coombe Abbey Hotel, is pleased that there is something positive to come out of the second national lockdown.

“Once again Coombe Abbey has had to close its doors to our guests and visitors and that left us with a lot of surplus food again,” said Ron.

“After seeing how our donations were welcomed last time, we thought it would be a great idea to send the food out to those who need it the most and that is local good causes and our NHS workers.

“The hotel has always been at the heart of the community and work closely with a number of charities in the region, so there was no question about what to do with all the food and we hope everyone enjoyed it.

“We know things are uncertain once again with the second national lockdown of the year, but we hope to see guests and visitors coming back to Coombe in a safe and secure way in December.”