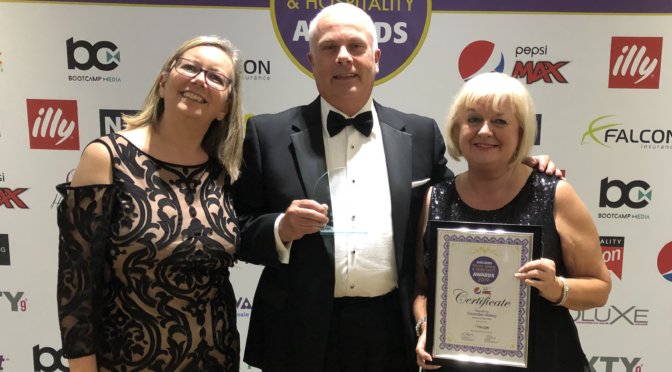 An award-winning hotel has added another trophy to its cabinet as it has scooped further prestigious industry recognition.

Coombe Abbey Hotel has been named Venue of the Year at the Midlands Food Drink & Hospitality Awards for 2019.

The former Cistercian Abbey was announced as the winner at a glamorous ceremony held at Aston Villa’s Holte Suite.

In the Venue of the Year category, Coombe Abbey faced stiff competition from the likes of Aston Villa’s Holte Suite, Millennium Point, Dallas Burston Polo Club and Ricoh Arena, but was named the ultimate winner.

This year has already been a successful one for the hotel after it won gold in the Best UK Unusual Venue category at the M&IT Awards.

But the win is made even better by the fact that it is decided by both industry professionals and members of the public.

People were given the chance to cast their votes for their favourite venues and then independent judges reviewed the shortlist then agreed on a winner.

Ron Terry, General Manager at Coombe Abbey Hotel, wanted to thank everyone who took the time to vote for the hotel.

“We are absolutely thrilled with the win and are so grateful to everyone who voted for us and helped Coombe be named Venue of the Year,” said Ron.

“It is always an honour to win awards, but to know that our guests went out of the way to support us and are happy with the way we do things is fantastic.

“I want to say a very big thank you to all our dedicated staff who, without them, we wouldn’t have won this award.

“Now, we will continue to work hard and make sure that we not only maintain our high standards but exceed them as well.”