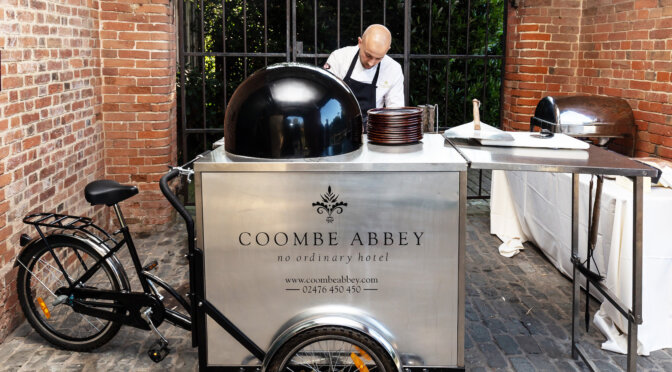 Catering outlets at a landmark Midlands country park have beaten their own annual turnover record – despite the ongoing challenges of the Coronavirus pandemic.

Coventry City Council, which owns the freehold of Coombe Country Park, appointed Coombe Abbey Park Limited under a collaborative agreement to develop the commercial potential of the catering outlets within the 500-acre park, which at the time had a sole loss-making cafe.

Since then Coombe Abbey Park Limited has rejuvenated the park’s catering offer which has led to the park outlets turning over in excess of £1 million in additional income so far – with around 40 per cent of the park’s 350,000 annual visitors now using its catering facilities.

This has included opening two further permanent catering outlets in addition to the existing cafe at the main Visitor Centre, including ‘Kiosk in the Park’ at the opposite end of the park selling drinks and sandwiches, as well as a dedicated ice cream kiosk. The Council is confident that these facilities have attracted more visitors to the park.

In addition, pop up food and beverage offers are now a feature of the park with a pizza bike regularly seen serving freshly made pizzas to visitors. The company has also partnered with the City Council’s park team – to deliver live events including an outdoor cinema, music concerts, theatre; with a festive light trail called Luminate also planned for later this year.

Efforts have also been made to provide a warm welcome to all at the cafe at the main Visitor Centre – known as ‘Cafe in the Park’ – by allowing dogs inside, launching tailor-made canine ice cream and flexing the centre’s opening hours in line with visitor habits and scheduled events.

Partnerships have also been forged with external organisations to enhance the site’s offering, including the launch of tree-top obstacle course Go Ape in mid-2019.

Richard Harrison, managing director at Coombe Abbey Park Limited, said: “A desire to attract our own footfall rather than relying on sunny weather has underpinned our success.

“The various changes we have made to the catering offer have been devised by frequently walking around the site, at least once a week, to observe visitor behaviour that we can try to capitalise on.

“For example, a quick observation was that the park attracts many dog walkers – and so we have some subtle yet effective changes to the main visitor centre cafe which now means it is generating frequent business from dog walkers who pop in for a hot drink and a snack all year round.

“We also identified that there was potential to sell food and drink from the half way walking point in the park. Kiosk in the park is on one of the main walking routes and in its first year in 2019 it generated an additional £60,000 in revenue.

“While the park has historically operated separately from the hotel, we have introduced closer working relationships to improve the park’s bottom line.

“As an example, the hotel’s dedicated food and beverage controller who ensures the business sources the best quality food and drink for a reasonable price is now adopting the same approach for the park’s catering outlets.

“We have traded resiliently through the pandemic and abided by the various government guidelines, and as such, the park experienced its best ever trade for August this year which gives us confidence that we are on for another strong year of trade.

“The improvements we have made to the park have had a fantastic impact so far – and the sheer size of the site means we have had the unique ability to welcome Go Ape as well which has enhanced the great offering that we already have.

“It’s a fantastic example of the public sector adopting a private sector approach for the benefit of the wider community – both in terms of the facilities they can enjoy as well as generating funds that are being reinvested in Coventry – and we hope it will inspire other local authorities with underperforming sites to follow a similar approach.

“Looking to the future, Coombe Abbey Park Limited is keen to explore opportunities with other parks  that are operated privately and by other local authorities, to enhance the customer offering and replicate the highly successful operating model we have introduced at Coombe Abbey Country Park.”

Find out more about Coombe Abbey