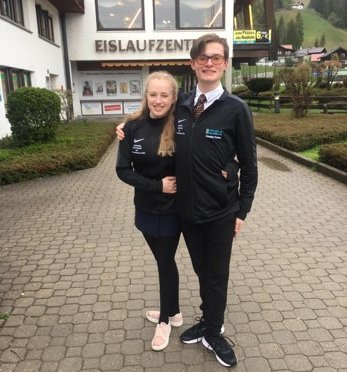 VENUES OF EXCELLENCE has lent a helping hand to a pair of young ice dance skating champions tipped to be the next Torvill and Dean.

The sales and marketing consortium – which recognises excellence across the meetings and events sector – has announced it is sponsoring Olivia Jenkinson (13) and Stanley Evans (15) throughout 2019 and into 2020.

Olivia, who lives in Sheffield, and Stanley from Corby in Northamptonshire, were named 2018  British champions in the Basic Novice category after just one season of training together.

Venues of Excellence’s support will enable the duo to train at their leisure by funding their ice for the year.

Additionally, the organisation has provided the pair with bespoke skating jackets, ensuring they look the part when competing both home and abroad.

Mandy Jennings, executive director at Venues of Excellence, said: “Our entire ethos at Venues of Excellence is to celebrate and recognise those who go the extra mile in what they do, so when we heard about Olivia and Stanley’s success on the ice rink and the glittering future that lies ahead of them both, we knew we wanted to get involved and lend our support.

“It’s great to see Olivia and Stanley in their new jackets and we’re thrilled to have played a part in ensuring they can train throughout the year.”

Olivia and Stanley’s journey to figure-skating success began in February 2018 when the duo was formed by head coach Edward Baker.

Then, less than one year after being formed, they were named British Basic Novice Ice Dance Champions 2018/19 – a huge accolade to secure, especially in such a short time frame.

Since then, Olivia and Stanley have attended their first International Skating Union Training Seminar in Oberstdorf, Germany and performed a demonstration at the British Ice Skating Coaches Convention in Sheffield.

“As both Olivia’s mum and a Venues of Excellence team member, too, it’s great to see the organisation supporting excellence not just in the meetings and events industry, but in the community also.

“Thanks to the sponsorship support, Olivia and Stanley can continue to make strides in their figure skating careers.”